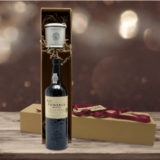 Organic version of the traditional favourite. Undoubtedly the best Port & Stilton Gift for Christmas so give the very best!

Details of production
Fonseca was one of the pioneers of organic viticulture in the Douro valley.
An area of its flagship estate, Quinta do Panascal in the Távora Valley, was
converted to organic viticulture in 1992 and today its Quinta de Santo António
in the Pinhão Valley is entirely certified for organic production. In 2002 it
became possible for the first time to produce a Port made entirely from grapes
derived from certified organic viticulture. This was due to an agreement with
a specialised distiller who was able to supply grape spirit for fortification made
from certified organically farmed grapes. The result was Terra Prima Reserve, an
elegant reserve blend, displaying fresh vibrant fruit, in which organic viticulture
has allowed the traditional port grape varieties to express their natural aromas to
the full.

This cheese is certified by the Soil Association – a guarantee that it meets their exacting organic standards. The Organic Stilton has a delicious mellow flavour, which contrasts with the tanginess of its delicate blue veins. This cheese is ripened for up to 12 weeks.

We’re not the only ones who think that this Organic Blue Stilton is the best of its kind. It was named Supreme Champion at the 2003 British Cheese Awards and Best in Show at the inaugural Organic Cheese Showcase in 2014.

Enjoy our Organic Blue Stilton on its own, or paired with pudding wine, port, dry sherry, claret, walnuts or honey and pears.

Quick View
Festive Treats Gift Basket
£37.50
Add to basket
Our website uses cookies from third party services to improve your browsing experience. Read more about this and how you can control cookies by clicking "Privacy Preferences".